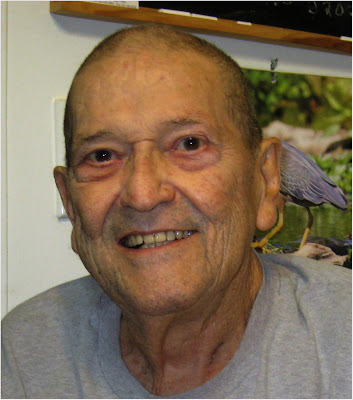 Gilbert Stivers Marshall, 82, of Dayton, Texas, known as Gil and better known by his close friends and family as “Fishy”, because of his love of the water and fishing, passed away silently and painlessly September 24, 2010 after a lengthy illness, surrounded by his wife and loving family.

Gilbert was born 24 August 1928 in Irvine, Kentucky at home to Thomas and Nell Marshall.  Gil from early childhood dreamed of travel and lived the life of a pathfinder throughout much of his life.  Serving honorably in the US Navy as a Machinist Mate and during and following WWII he traveled across North Africa, the Middle East and Europe and was a walking encyclopedia of information on geography and many other subjects.

Always the pioneer visionary, he shunned commercialized amusement and instead took his family on adventures like panning for gold in the Rockies, hiking the trails of the American ranges and forests, hunting and fishing the choicest of lakes, ponds, and streams, searching rock quarries for fossils, roaming Americas deserts for exotic wildlife, and venturing from the Pacific Ocean to the Great Salt lake, the Texas Gulf coast and the waters of the Great lakes.

Gilbert spent much of his life as an expert Tool and Die maker in machine shops across the country.  He was heavily involved in the development of the Lockheed C5A project in Marietta, Georgia and the F4E project at McDonnell-Douglass in St. Louis, Mo. and in later years a “Gold Hat” for Brown & Root in the Middle East as a Pipe Superintendent.

Gilbert is preceded in death by his parents and grandson Sgt. Nick Marshall.  He is survived by his wife of 61 years, Marian, his daughter, Connie Byrd (Michael), sons, Bert Marshall (Sandra), Gordon Marshall (Cindy), Terry Marshall (Debbie) and Bruce Marshall (Linda), his brother Harry Marshall (Mary) and sister Jean Koglman (Johnny), along with many loving grandchildren and great grandchildren.

Never the one to be selfish with his life, Gilbert asked to have his body donated to science and then cremated.  A memorial service will be held at Christmas for friends and family.  The family would like to thank everyone for the outpouring of support and love in this difficult time and celebration of his life.  Bubba, you did good.

For those desiring, memorial donations may be made to Myasthenia Gravis Foundation of America (MGFA).
at September 29, 2010 20 comments: 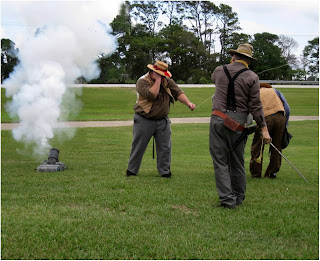 I finally had time to put all of this together!  If anyone has photos of the event, please send them my way and I'll add them to the pages.  In this photo, the Bayland Honor Guard - Living history actors salute the marker with an old cannon.
at September 22, 2010 No comments:

One American is Evidently Worth 8 Iranians! 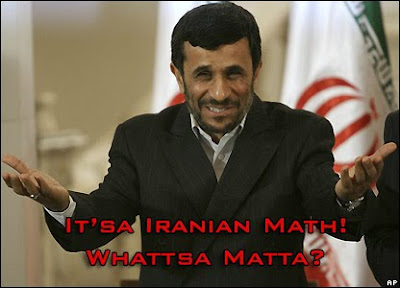 .Ahmadinejad Wants Release of Iranians Held in U.S.
By JOSEPH BERGER
Published: September 19, 2010
"One of the three American hikers held in Iran for 13 months on spying charges arrived in the United States on Sunday as Iranian President Mahmoud Ahmadinejad said that the United States, as "a humanitarian gesture," should now release eight Iranians whom he said were illegally arrested."

Here's my take and you can call it Redneck Texan, if you want: Now that is some fancy math, President Ahmadinejad.  When I saw this headline, I couldn't see how many he wanted us to release for it to be considered a fair exchange, but somehow, I already knew the answer... it would be ridiculous.

I'll answer for President Obama "Okay, here's one Iranian.  Got any more Americans, cause I got more Iranians"?

Evidently, one American has the same value as eight of his own countrymen.  Don't call me a hater - he said it, I didn't.
.
at September 19, 2010 No comments:

This in from Larry Houston:  Bert was instrumental in arranging funding for a new historical marker in Baytown, commemorating the Bayland Guards. The unveiling was this morning. http://www.youtube.com/watch?v=c7daSXQ7TN4
Top 2 photos by Larry Houston.  The man in the red shirt is Darrell Bailey - Total Petrochemicals Manager.  The lady in the aqua blouse is Harris County Historical Commission's Trevia Wooster Beverly.

The marker on the right is one of Bert's earlier efforts. 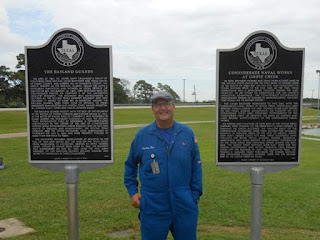 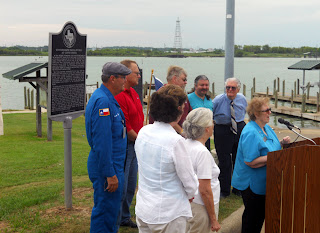 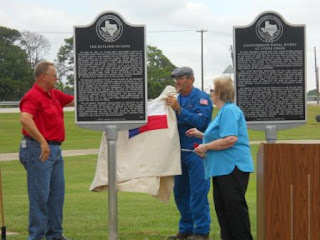 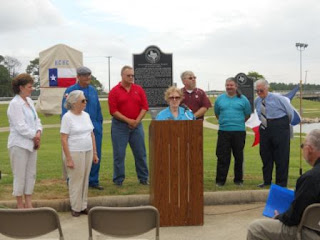 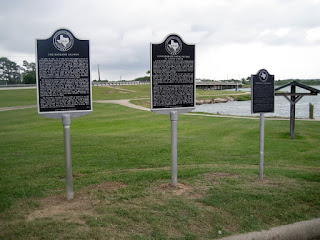 The Galveston Regiment was redesignated on October 12, 1861 as the Second Texas Infantry Regiment. Seeing battle at Shiloh, Corinth, and Hatchie Bridge, with the Second Texas Infantry, the Guards served bravely and distinguished itself for the defense of a crescent-shaped fortification at Vicksburg.
They faced “forty-seven days and nights of daily shelling and nightly bombardment in a narrow ditch, exposed to the scorching heat during the day and the often chilly air and dews of night” from two Union assaults. The Bayland Guards, as part of the Second Texas Infantry, was surrendered at Vicksburg on July 4, 1863 and was paroled within the week. They were exchanged September 12, 1863, reorganized in Texas during the fall of 1863, and surrendered May 26, 1865.

As part of the Second Texas Regiment, the Bayland Guards served with distinction and honor, and upon returning home from the war, shaped by their wartime experiences, helped to shape the future of the communities they represented. They continued to distinguish themselves as the bay area began to rebuild itself and go through Reconstruction. They were the farmers and ranchers, teachers, doctors and dentists, business owners, and several served in elected offices. 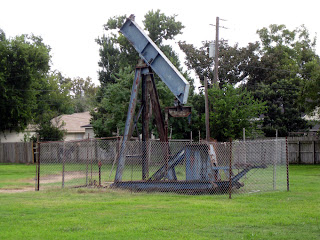 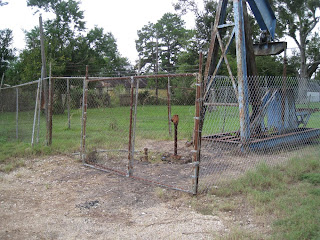 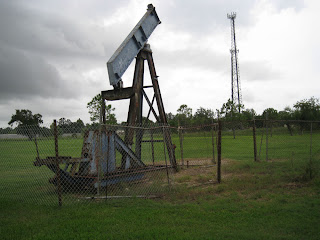 I wish I knew who to thank for making this pump-jack safe again, but I was there today and the fence, albeit old and rusty for the most part, is back up and secured.  Thank you!
at September 17, 2010 1 comment:

.
Hello, Mr. Brumback! I'm trying to find the plan for the development of a trail system in and around Baytown, but can't seem to find it. While geocaching (and you may have heard me comment in my videos) I am continually impressed with the large scale development of trails along Fairmont Parkway, Red Bluff Road, and now along McCabe Road in La Porte.

McCabe Road and Fairmont Parkway trails are cement and very wide and this has to have cost a fortune, but where and how are they getting funding? I think it is imperitive if Baytown is to attract higher income families, we push the trail system forward asap.

Baytown native, Larry Houston and I have now successfully placed a large number of geocaches (23) along Goose Creek trail to attract out-of-towners and hopefully they will stop in for a bite to eat while here and as a side benefit, use our trail making it inherently safer. It took the Jenkins Park (Cary Bayou Trail) a long time before it felt safe, but now there are a lot of people using it. Incidentally, there are also 12 geocaches hidden in Jenkins Park/JC Holloway.

Rumors are Lee College wants to become a 4 year college and this further pushes the need for an extensive bike/hike trail system, especially along Goose Creek and its tributaries. Our city's streets and lack of shoulders are literally dangerous to bicyclists and desperately needs better biking trails of distance.

Next is the Jenkins Park trail expansion and the continued development of the Bark Park. The trail expansion should be carefully planned so a 5K distance is achieved, instead of an arbitrary plus or minus that amount. This will allow runners to know their exact distance, making it a perfect place to train for 10k races, etc. The sooner the overall plan is developed, the sooner trees can be planted. 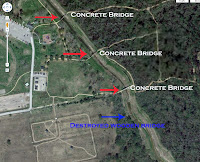 What is the plan concerning the 3 bridges across Cary Bayou? I believe I heard Scott Johnson say they would be replaced.

Concerning the Bark Park: The city should light this park. Next, a flea and tick spray schedule should be placed outside the park and updated monthly.
at September 11, 2010 7 comments: 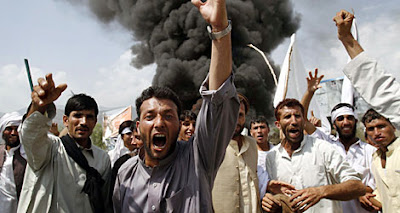 We are on the doorstep of the September 11th, 2001 anniversary and once again our country is under attack by Islam. There, I said it. Our leaders are jumping through hoops to accommodate the world’s most radical and intolerant religion and the egregious kowtowing to the bombardment of Islam’s threats makes my skin crawl.
U.S. Secretary of State Hillary Clinton said the Quran burning would be a "disrespectful, disgraceful act."


Granted, a small congregation of fifty “Christians” is to blame for inflaming the angst of 1.5 billion Muslims (as implied by the world Press), and even though I think this is an unchristian act, I support their right as Americans to burn the Quran, the Bible, the American flag, or an effigy of Lindsey Lohan.

Where is the multitude of American Muslims who should be screaming out in support of Reverend Jones to practice freedom of speech, something they demand when they see anti-Muslim activity? Where are they when anti-Christian activities in Muslim controlled countries desecrate Christian Bibles?
The religion Islam is intolerant of every other religion, regardless of how it is sugar-coated otherwise. It is not a religion that exemplifies ”submission to God’s will” in the Christian sense at all, but a violent and inflexible religion which demands punishment for anyone who doesn’t practice it and then further boils down into radicalism which is intolerant of every other version of the same religion.

Hamas leader Ismail Haniya called Jones a "religious criminal" and a "retard that expresses a Western-retarded mentality" that targets the Quran, Islam, and Muslims. Speaking in Gaza at the start of the Eid holiday, Haniya said, "I call upon God the merciful, if they want to rip the Quran, for God to rip them apart and their state and make them an example for the believers."

When one of the many forms of this religion raises its violent hand, the other versions sit quietly by and do not speak out against it, for fear that they too will become a victim. That’s the best case scenario. The worst case scenario and one that more and more Americans are beginning to believe is, the silent majority of Muslims are complicit and deep in their hearts believe God’s will is being carried out.

A spokesman for the Taliban in Afghanistan told CNN, "If in Florida they were to burn the Quran, we will target any Christians, even if they are innocent, because the Quran is our holy book and we do not want someone to burn our holy book." 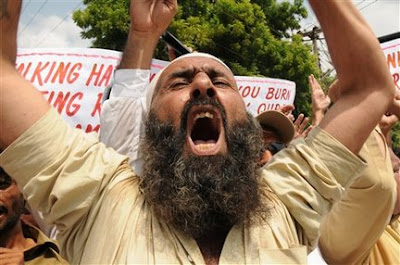 America, the once great and powerful benefactor and granted, protector of freedom and democracy has been effectively brought to its knees by a loving and peaceful religion, if you believe what you hear and read.

The foolish idea that we should accomodate a violence condoning and prone religion and “let a mean dog lay” is both blatantly stupid and ostrich with its head in the ground optimistic. Let's use fascism and the way many leaders viewed Adolf Hitler as an example.

The more control we give them, the more they control us.  It's so simple, even a caveman could see it.

A senior Iranian Shiite cleric, Grand Ayatollah Lotfollah Safi Golpayegani, condemned the plan to burn the Quran and called for the arrest of Jones, head of the Dove World Outreach Center, according to Iran's semi-official Fars news agency. Should such an "inhumane incident take place in America, the U.S. government and President Obama will be held responsible," he said, according to the report.

Maybe it’s time we elect Michael Bloomberg as President. He appears to be the only one with enough guts to stand up for our country and the Bill of Rights.

New York Mayor Michael Bloomberg has defended the right of the Rev. Terry Jones to go ahead with the plan, even though he condemns the idea as "distasteful." "The First Amendment protects everybody, and you can't say that we are going to apply the First Amendment to only those cases where we are in agreement," Bloomberg said this week, citing the section of the Constitution that promises freedom of speech.