According to the Baytown Photo Club member Steve Green, this is the latest update on the presense of American bald eagles on Tri-City beach road in Baytown: 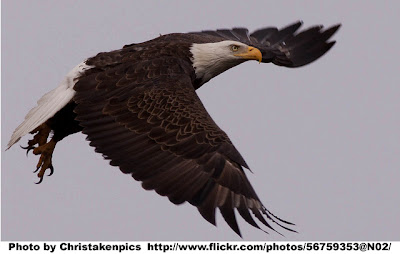 "A fellow member and I were at the Eagle Nest this evening and both parents flew up and one posed for us , the other lit behind the nest.

Their chick was last seen by them 5-7 days ago. He was not visible in the nest today. My friend knew that this nest was ahead of the pair on Normandy but it seemed early for it (chick) to have left totally.

Usually just before the chick takes flight it must lose a lot of fat and weight and the parents will quit feeding it instead getting it hungry for a hunt.

There are still opportunity for good shots there as the season changes. No matter in a hand full of weeks they will all leave until next year. The full grown chick will look elsewhere for a mate for years until maturity.

All looks normal and 40% of chicks make it according to the sight above".

*photo taken of Baytown bald eagle by Chris N., a local resident and member of the Baytown Photo Club.
.
at March 30, 2011 1 comment: 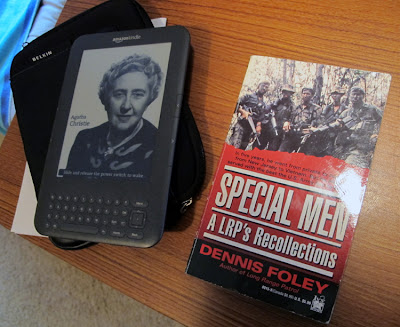 I am playing catch-up after working almost 6 weeks of straight 12 hour days and I finally have time to write about a few things that have stirred my interest.

I bought an Amazon Kindle 3!

Before I get into what I think about it, let me explain how it came about.  I was reading a book that I bought in 1995, but for some reason never read named “Special Men – A LRP’s Recollections” by retired army colonel Dennis Foley.

I really enjoyed the book and I had a few observations and questions for the author, so I looked around and sure enough, Dennis Foley has a website, so I wrote him. This started a dialogue that has continued via email for the last so many days.

He encouraged me to continue my writing efforts and to take a look at his latest book, which at this time is only in Kindle format, albeit, you can purchase it from Amazon and read on your PC through an “App” from Amazon – so I did.  Aw, heck, to make a long story shorter, I took the plunge and bought the Kindle too, even though I am stubbornly resistant to advertisers and gimmicks.

Well, let me tell you, the second I turned the Kindle 3 on (after charging it), I was hooked solid.  Wow, this thing is everything they said and more and I say that sincerely.  I was wondering how I was going to get the e-book I bought  “A Requiem for Crows” by Dennis Foley onto the Kindle 3, but following the simple instructions included with the device, I connected to my Wi-Fi router and watched the book appear before my very eyes.

Incidentally, I have the Wi-Fi model, not the 3G, which was $50 less or $139 shipped to my address.  Over the next 2 days I flew through “A requiem for crows” just like a paperback book, making the flawless transition painlessly.  I am totally hooked on the Kindle, but will continue to read printed books when the titles I crave are not available.

I went ahead and bought Colonel Foley’s 3 other text books online also, which are: “Long Range Patrol”, “ Night work”, and “Take back the night”.  Colonel Foley tells me “Well, get your fill of mine. No more military books from me. I’m on to other worlds other characters live in.”, but I am hoping he will follow up on a character in “A requiem for crows” named Ace.  He also tells me he hopes to have all 5 of his Vietnam books in e-text soon.

Two nights ago, I surfed to Amazon.com and “purchased” over 40 free full length classic books written before 1923 which I plan to read.  Now, using my Kindle, if I fill it up with all the books it will hold and read 100 books this year, I will still have 34 years of books to go and seeing how the battery stays charged for one month at a time, I won’t have to plug it in every other day and mess up my readin' time.

.
Cornell wrote:  March 5th, 2011 - CD Release in AUSTIN...come hang with us at The Broken Spoke - Last of the True Texas Dance Halls, and pick up a copy of BIG STATE, LONG ROAD, and our new CD. 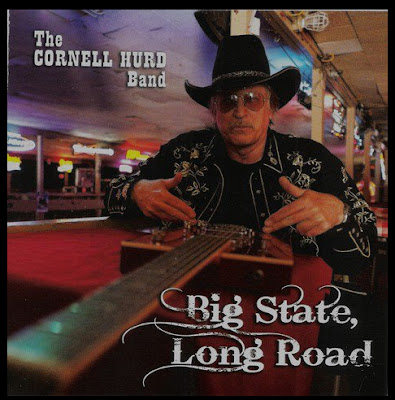 Cornell and I correspond occasionally to discuss (of all things) my geocaching videos and his music, or my take on his music.  He’s very approachable, by the way and when he isn’t playing in Austin or Houston, he drops a line.

My friend Dan Ellis (Wanda Ellis’ of the Baytown Museum’s son) loaned me a copy of Cornell’s CD “Live at Jovita’s” and it got inside my head real fast.  I’ve featured some of it on my geocaching videos as tribute to the band.

I had to have a copy, so the very day it was released, I sent Cornell the denaro.  Boy howdy, I was not disappointed!  I think this is his best and most accomplished studio effort!  He has all of his best stuff on it and it is going to stay in my car so I can get my Texas Swing fix going back and forth to the job-20.

"This is our "heart of the show" CD. For the most part, they're songs that we've played for years at our Texas dances. Most were re-recorded. All were re-mixed and re-mastered. Different vocals, solos, arrangements on some of them. There are a couple of exceptions. Paul Skelton's beautiful take on "Texas By Night (Twilight) is presented here in its entirety. "Heavy Breathin'" was a big number for me in San Jose a long time back. The new version is a Texas take. We're real happy with this record."

Cornell also has a Facebook page and a web site where you can get your mitts on his albums and memorabilia.
http://www.cornellhurdband.com
http://www.facebook.com/pages/Cornell-Hurd-Band/63645417771

Jimmy McDonnell is a long time friend and a member of the Baytown Art League.  I own 2 of his original drawings and they are amazing in detail and he is truly a gifted artist.  He is also very active in Toys for Tots and a great humble guy.  Both he and his wonderful wife are true assets to Baytown.  The originals are highly detailed pencil drawings.  Please support him by buying one of these limited prints.  BB

OK everybody. I now have quality prints of some of my work for sale. These will be limited to 50 copies and they will be signed and numbered. 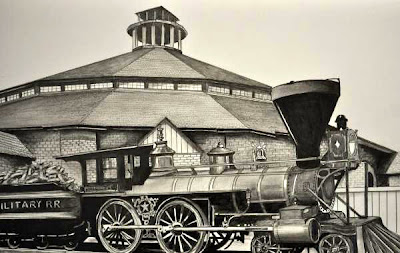 They will be delivered to your door for $35 each in a cardboard tube mailer. If you want something matted, contact me for prices. The prints are of the Great Wall of China completed in 2006, the village... scene in Malta completed in 2010, and the Civil War locomotive completed in 2010. 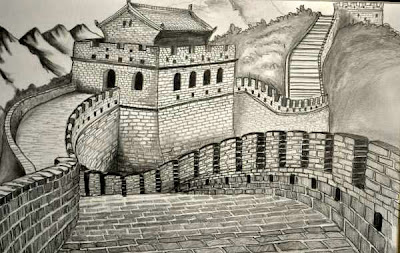 If interested, I can send a digital of the art work. When I make back my initial investment, i will have additional pictures printed up if there is enough interest. If you want all three prints, price delivered to you is $95. Checks/ USPS Money Orders, or Paypal Gift. Of Course, I also accept silver bullion. 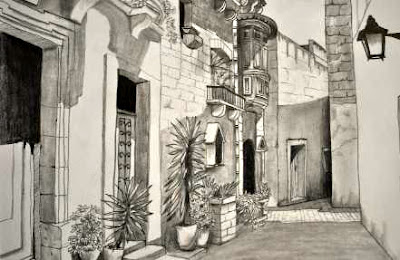 I am hoping this venture will help me get better established doing artwork and get more exposure. Appreciate everyone's support.   Jim McDonnel "Blue Angel"
.
at March 14, 2011 1 comment: 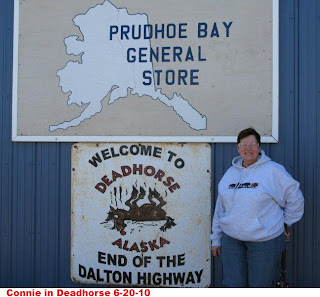 ﻿When I arrived at work this morning the temperature was 23 below zero; 47 below zero with the wind chill factor. It was a gorgeous morning and a cloud free sky with a moon that looked like a Halloween advertisement, except that it wasn't full.
Driving in, from the side, I saw an odd cloud and instantly realized that it wasn't a cloud at all, but auroral activity. So, I pulled into a parking lot and watched while this long tendril of pale green light arched and undulated and slithered across the northern sky like a snake covered with feathers. It lasted about 5 minutes before the sky lightened enough that I could no longer see it.

Graded 1 to 10 on the spectacular scale, it was probably about a .4 - but still, it was the Northern Lights and the first I've seen. The chance that I will see it again before next winter is about zero. I suppose it's like me counting that I've been in Washington state (I don't) even though I've only really been in SeaTac Airport about 20 times and never anywhere else.

We are already at about 13 hours of daylight and we get about 9 more minutes each day, or about an hour more daylight every week. When I return from my next R and R, I will be driving to and from work in the daylight. Right now it is still mostly dark on my drive in, but light for my entire drive home. 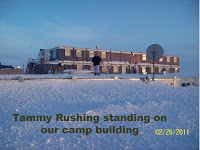 While I was home in February the Slope was shut down completely for three days and barely functioned for about seven because of a massive blizzard, called a Big Blow up here. The picture attached is Tammy Rushing standing on our camp building. She just walked up the snow to the top. It took a couple of days to dig out so that people could drive. So far, I have not been in a storm like that; they all happen while I am gone!
It is steadily warming; with the temps usually hanging around 10 below; on days that it warms more, there is usually snow and often, wind too. I am surprised at how little the cold bothers me. I really thought I would have a hard time making it through the winter, but, as I always say: "It's not that bad!" Strange as it may seem, when it is 50 degrees at home, I am freezing! 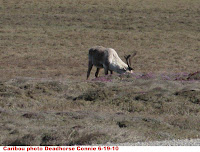 Driving home the other day, I saw three caribou. I am amazed at how they can survive the 6 months of total snow cover on the tundra. Most migrate south to the Brooks Range, but a handful never leave here. Aside from them, I still see foxes regularly and an occasional raven. I'm looking forward to May and the arrival of the birds. 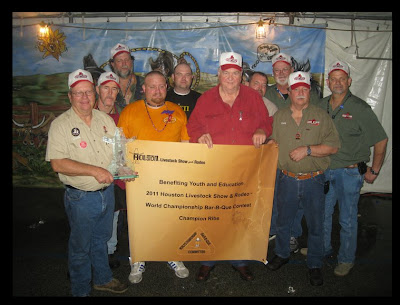 Charlie Tallant and his world class BBQ experts blew the competion away this year at the Houston Livestock and Rodeo Cook-Off!  Now, I have personally consumed quite a good amount of these delicious Baytown (Goose Creek) ribs and brisket and was personally served by Charlie.  You see, he's family, being the older brother of my own brother-in-law, Ray Tallant, or Raybuck, as we know him.
The secret to their success is the many folks behind the scene and at the fire, working the daylights out of those ribs.  Charlie, being the consummate steady presence, along with his beautiful wife, Anna Kay have did Baytown and Goose Creek real proud this year!  Hooray for the Goose Creek Cookers and as my dad was fond of saying "You did good, Bubba"!  Y'all make Baytown proud and a better place to be because you all are here. 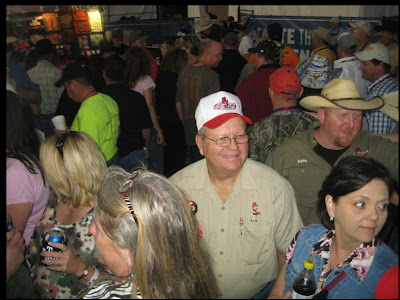