All great adventures begin with an adventure.  Did I write that?  My adventure started a few days before we left to go to Pedernales Falls State Park when my geocaching buddy, Aaron Barbee gave me a utility trailer.  He told me it needed TLC and it did.  I love this trailer.  I poured my sweat into it to get it ready to haul camping gear and firewood 225 miles to the campsite close to Johnson City, Texas.

I added $200 worth of new tires, straps, and wheel bearings to make sure it would handle the trip. Always keep an eye out for auto parts store coupons; they come in handy.  I was so excited to leave, I forgot my tent and 2 containers of camping equipment.  When we camp, it is as if we are the Dugger family, taking anything we might possibly need and more.  I blame the small amount of Boy Scout training I had for this behavior.

I pride myself on making few mistakes and to say I made a few mistakes on this trip would be a bald-faced lie.  The trip was one mistake on my part after another.  I was determined to relax and I must have taken a brain-relaxer, because it was as if I was back in 9th grade algebra - I was dumber than a box of rocks.

Being the guy that I am, I stopped about every 30 minutes and checked the trailer load and wheel bearing temperature.  The drivers side was getting warm, but nothing serious.  The 4th time I checked it was in Bastrop and we stopped and ate a bite at the Dairy Queen there.  After we were done, the bearings seemed cool, so off we went… and then my bride got a phone call from my son-in-law informing me that while picking-up our doggies, he discovered our left-behind equipment.
"That's it.  We have to turn back."  I stated.

"I know, but we can't camp without what is in those two boxes."  I exclaimed, feeling failure wash over me.

"Well, if we drive all the way back, I am not going to camp."  My bride said, voicing my disappointed sentiment.

So, I wheeled the trailer and Jeep around and pulled into a Valero gas station to top off my tank.  That is when I noticed the drivers side wheel was about 10 minutes from falling off.  The bearings were completely gone and the wheel was wobbling.

"Aye Curumba!"  I yelled out in a vile torrent of butchered Baytownian Anglo Tex-Mex!

"If we would not have stopped when we did…"  I said and we both thanked the God we serve for the phone call.  All I can figure is it is divine providence that I left the supplies, or I could have lost that tire at 60 mph.
I drove slowly back east on SH-71 and seeing a garage, I pulled into Bastrop Auto Works - Foreign and Domestic Specialists and met the nicest guy named Rene Rizk, who is the owner/manager.

"If you can drop the trailer Mr. Marshall, I'll have it ready for you in the morning and it will handle like new - I promise," were his exact words or something like that.

So, off to Wimberley my bride and I head.  Wimberley, Texas to my bride is like going to heaven.  I did not do everything wrong my friend.  We chummed around town and finally got a room at the excellent Square Inn, right on the square.  It is a real nice place ran by a single mom of triplet teenage boys. I highly recommend it.

The next morning, we made our drive back to Bastrop and Rene's son took our denaro, as Rene was fishing for Spec's and Red's in the Gulf this fine morning.  Hitching up the "like new" trailer, off we went for our camping trip and true to his word, the trailer performed like it was supposed to.

Arriving at Pedernales Falls State park, we learned I had lost my $20 deposit and had to pay the full price, since I didn't give the State of Texas a 72 hour notice I was going to have a bad trailer spindle.  Oh, well, just pass it off as another minor inconvenience and move on down the campsite.  Number 64.  The Ranger whispered it was highly coveted and a few days later, a woman asked when we were leaving, as they wanted our spot.  I felt pretty smug after that.

We had almost everything set up before my daughter and son-in-law came rolling in with the tent and our missing containers of camping gear - and our 4 little doggies!  Oh joy!  What a fantastic rescue they put on for us!  We cooked food on the campfire and swam in the Pedernales River over the next two days.  While in camp, we listened to my DVD's of the Cornell Hurd Band, Hank Williams, James Harmin, Wayne Hancock, and Bert Wills.  It just didn't seem right not to listen to Country and Blues music around the campfire.

My bride and I camped the last two nights by ourselves and even made a mandatory trip over to Marble Falls to eat at the Blue Bonnet Cafe - an absolute must and thanks to my friend Buddy Casto, we even made a trip over to see the Castle Avalon on the mountain.  By the way, it was 100 degrees outside and it is April for crying out loud!
In the Park we saw deer, turkey, 3 short-nosed gar - hiked the 4-mile Loop trail, did a bit of geocaching, cycled, cooked meat on a stick over a campfire, and had a wonderful time.  An amazing sight was looking up through the netting on the tent at night at the millions of stars - after taking a good warm shower in the clean Park bathrooms of course!

I don't want to conclude without mentioning that I left my cell phone charger and had to nurse my usage carefully - but remembered to bring 3 cameras.  I warned everyone repeatedly about the raccoons at nighttime and then I left a case open and the rascals destroyed a bit of foodstuffs including coffee and grape jelly.  I clumsily stubbed my great toe in the shower. I brought 4 pair of binoculars, which we didn't use, but forgot the tent.  Then on the way home, my Jeep caught a rock in the windshield.

I did however percolate French Market coffee with chicory over the fire in my Dr. Strangelove coffee cup and by golly it was American and delicious! 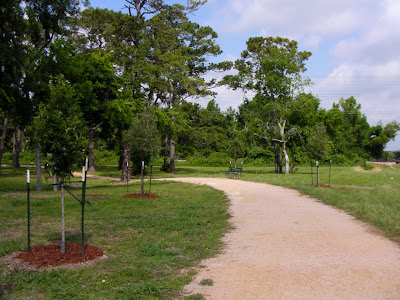 It is no secret last year's drought killed a lot of trees in Baytown.  Fortunately, we didn't lose 1800 homes to fire, like what happened to the good folks in Bastrop.  After the city decided for safeties sake to cut down a number of trees in my favorite park, I appealed to Mayor DonCarlos and Parks Superintendant Scott Johnson to find out what we could do to re-foliate the park. 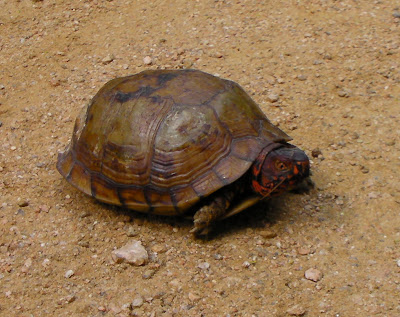 We went for a walk in the park today and came across this little fellar on one of the trails.  The trees appear to be live Oaks, Elm, Pine, and a couple more.  I love this park and from the look of activity around us, a lot of other people do too.  My hat is off to the Mayor and the Parks Super for the great job they did and are doing! 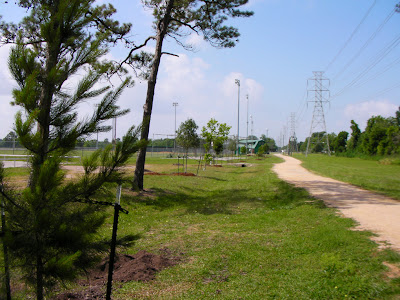 Mayor DonCarlos approached Exxon-Mobil and they generously donated $5000 for new trees!  He contacted me to help round up some folks and with anticipated enthusiasm - I went off camping!  Literally and I didn't get back in town until all the planting was over!  With dead cell phone and battery in hand, I did what I could to let them know the second I got back, the error of my ways. 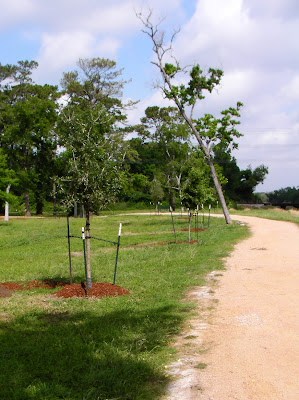 Both fine Baytownian civil servants were gracious enough to forgive me, as I had my lovely bride on vacation and afterall, her happiness is paramount to my comings and goings.  So, to show proof I was actually not out goofing off, here we are enjoying Pedernales Falls State Park. 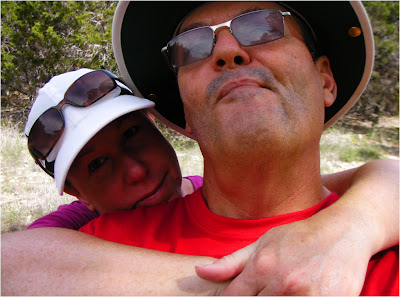 The Baytown Photo Club is Trashy!

.
Yes, the Baytown Photo Club is trashy and they are proud of it.  Every quarter, they gather behind DeZavala Elementary school to begin picking up trash on Tri-Cities Beach Road.  Whenever I can, I join them and do my share.  Today we picked about 15-20 bags of garbage, plus all kinds of other stuff and a few unmentionables - as always. 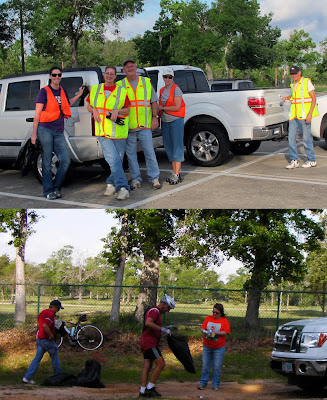