I was walking my doggies at Walter Jenkins Park this afternoon, marveling over the explosion of activity by disc golfers.  I could see at least five groups and all of them were carrying or wheeling the trademark bags of discs and equipment.  I even got to see a disc fly off course and disappear under the rushing water of Cary Bayou (Yes, not all of them float).  The sudden rain storms have the bayou moving pretty good and just a couple of days ago, it was dry.
I talked to a number of the players who hailed from Kingwood and asked them how our course compared to the more than 50 courses in the Houston area, and as one they remarked it was a premier course.  They were very excited about the upcoming tournament August 24th and said the park would be loaded with golfers from all over the state. 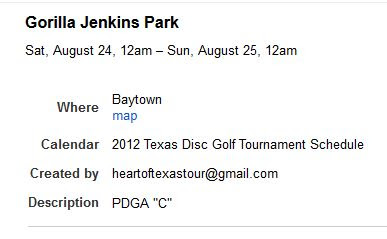 From what I could see there were seniors, early teens, male, females and even a couple walking their dog while they played.  It looks like a lot of fun and a great amount of exercise, as they not only walk as much as 18 "holes", but the incredible amount of body English they employ has got to have an effect on the old body. 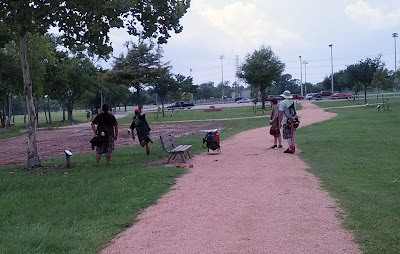 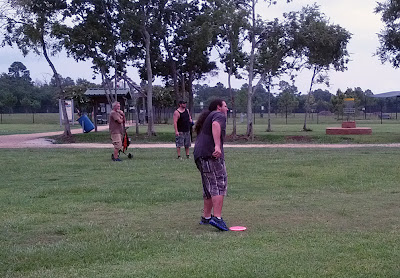 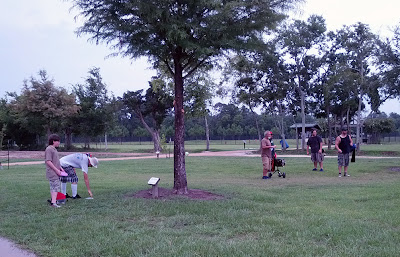 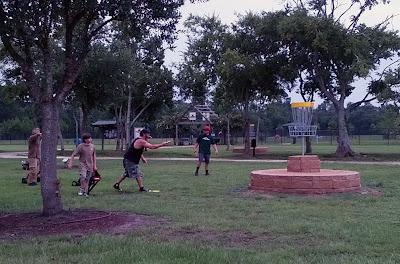 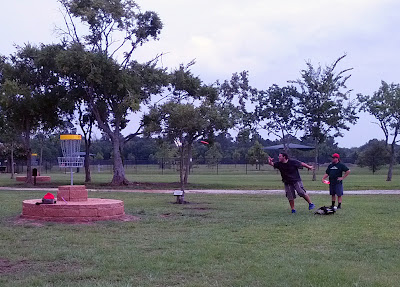 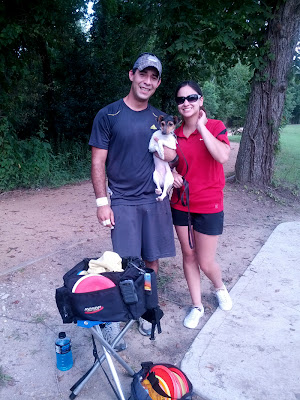 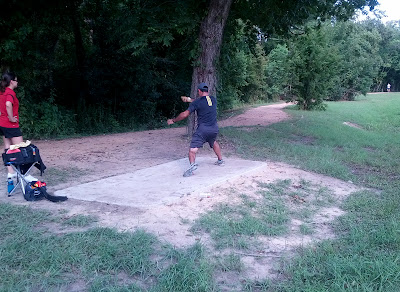 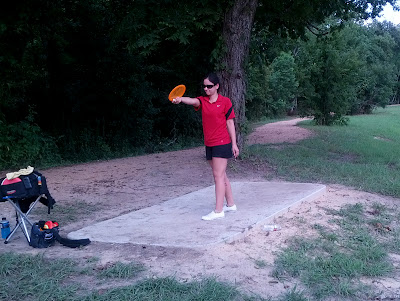 Baytown Parks under Superintendant Scott Johnson, has done a good thing and kudos all the way around to Parks planner Dustin Schubert and the other folks involved in making this course a reality.  For more information on disc golf, contact the Houston Flying Disc Society. 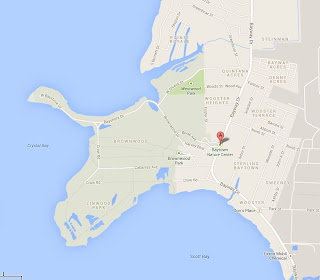 Do you love fishing? If you’d like to share that love and volunteer with Texas Parks and Wildlife, consider becoming a certified Angler Education Instructor. No experience is necessary; the free workshops are ideal for the novice or experienced angler.

The next Angler Education Instructor Workshop in the Baytown area is at the Eddie V. Gray Wetlands Education and Recreation Center, 1724 Market Street. An Aquatic and Angler Education Certification Course taught by Tracey Prothro, and Chuck Ganze is offered on July 27, 2013 from 9:00 to 12:00 noon. The course covers the TPWD–AED Curriculum that is TEKS-certified through the State Board. There will be several instructors with well-rounded experience in Gulf and inland fishing present.

Candidates interested in the course as future instructors should contact Ganze @713-899-5498 or Prothro @281-420-7101 as soon as possible. The free workshop is open to anyone 18 or older interested in teaching fishing skills in their community. For more information about the workshop, see the TPWD calendar at http://www.tpwd.state/
tx.us/calendar/fishing-angler-education-instructor-training
at July 24, 2013 1 comment:

The future of Baytown

An open letter to our city's leadership:  I know everyone is seeing the scorched-earth dirt work that is going on all around Houston and Baytown.  Its almost as if there is a vendetta against anything green.  God help us if we don't start an aggressive program to replant. The greenhouse gas alone will continue to spike upward and then there is the very serious loss of habitat for wildlife to consider. 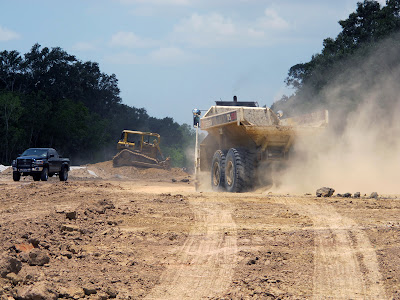 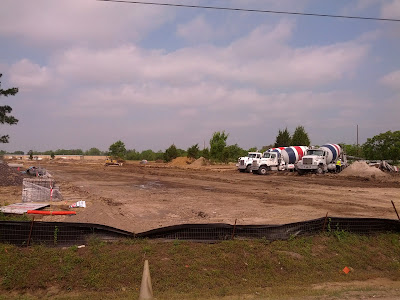 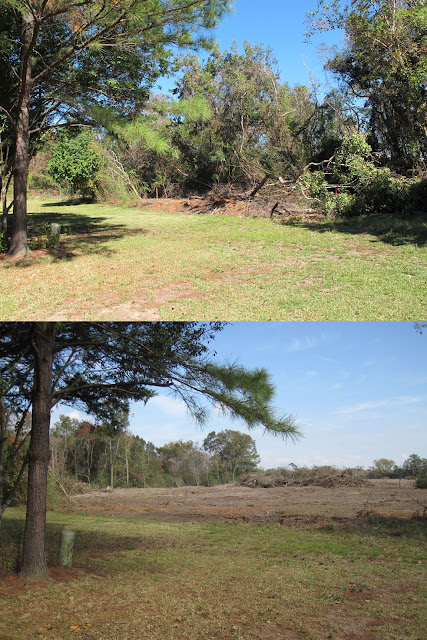 Baytown has always been a blue-collar town and I like it that way, but the truth is we have to start looking at more than people and industry growth, or the people earning very good livings off of our industry will live elsewhere and our collective health will decline.  We must push, push, push the expansion of parks and hiking/biking trails and businesses must be encouraged to replant trees and more trees, specifically native varieties tuned for the Gulf Coast.  I am going to retire here, most likely next year with no plans to go to "greener" pastures and I'm watching with enthusiasm for Baytown's future under you folk's direction.  Please don't let me and my neighbors down. 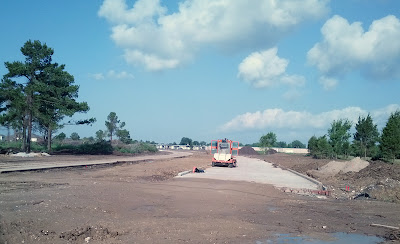 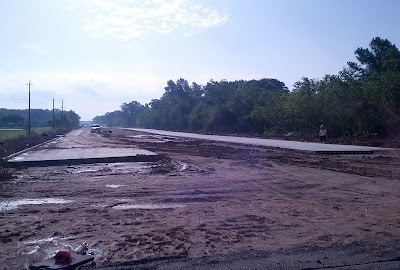 I've watched with interest as our Parks department headed by Scott Johnson has steadily improved our many parks and with the newest addition of a DGC, or Disc Golf Course, we are competing with the many fine courses in the Houston area, and according to one player yesterday, this course will be a showcase.
July 4th morning, my Bride and I observed close to thirty players on the 18 hole course, all carrying the shoulder bags of discs, or small Frisbee-like saucers they throw.  The closest course to Baytown is over 15 miles away, so get used to the idea of people coming to Baytown to play this popular sport.

One player wrote a review on the course:  "Beautiful park space. Latest/greatest DISCatcherPro model baskets with just about all the chains you could want. Ample sized concrete tees (see Cons). Plenty of parking and the course loops back to the parking lot between holes 9 & 10 so you can restock if necessary. The elevated baskets on holes #9 and #18 are very well done and add a nice element to the course. The first half of the course is more technical requiring reasonably accurate shots to card birdies for INT/ADV players. The second half of the course opens up a lot and is more forgiving of errant drives but #10, #13, #14, and #17 really let you try to crush some drives. While the first half wouldn't be considered "woodsy" by most standards, I do like the balance of shorter shot-making holes and longer bomber holes." 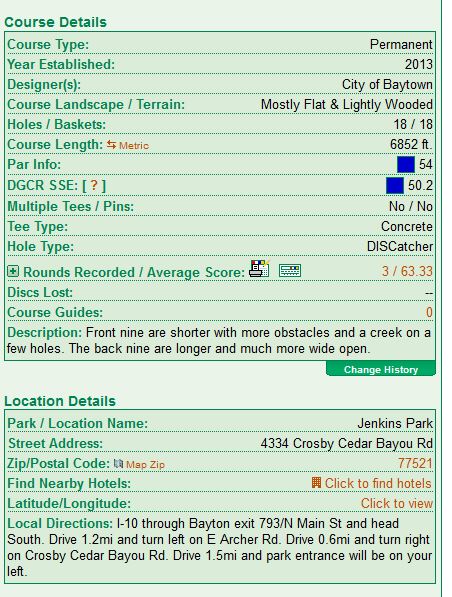 Disc golf is a flying disc game in which individual players throw a flying disc at a target. According to the Professional Disc Golf Association, "The object of the game is to traverse a course from beginning to end in the fewest number of throws of the disc." The number of disc golf courses doubled in the 8 years from 2000 to 2008. The game is played in about 40 countries around the world. 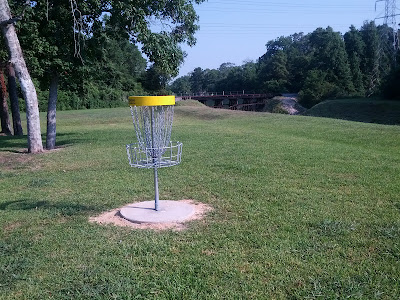 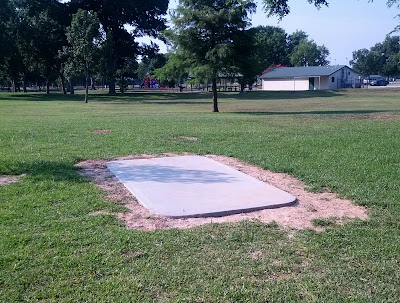 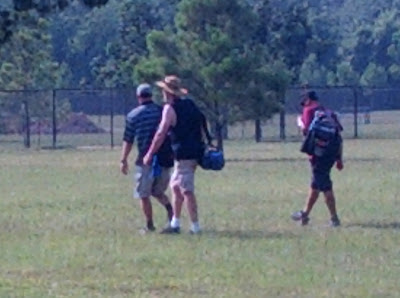 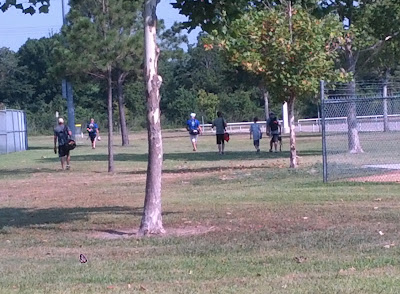 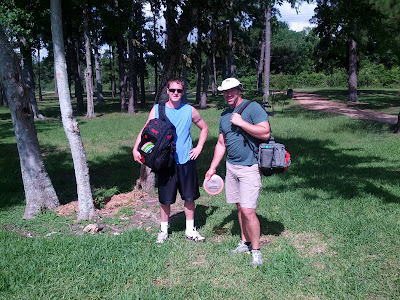 More information about this exciting sport is available here:  http://en.wikipedia.org/wiki/Disc_golf

One thing is sure and that is Scott Johnson and park planners got it right again!
.
at July 05, 2013 No comments: