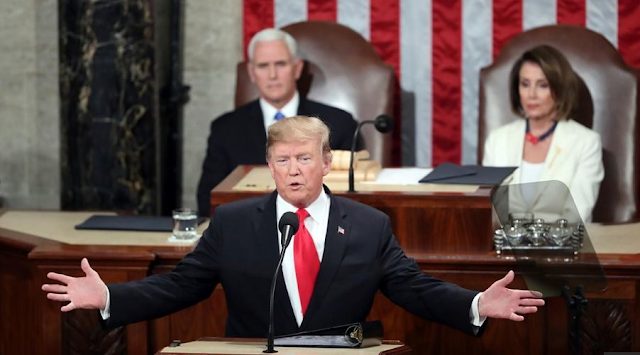 I thought Donald Trump looked and spoke very "presidential".  In 2 years he has really improved his delivery. I also though Nancy Pelosi behaved herself and this was most likely due to the fact that Chuck Schumer wasn't whispering in her ear.  That man's smirk rankles me. Is smug partisanship the message he is trying to send to America? The man is the Senate Minority leader for God's sake representing a huge portion of the voting population. I believe the man only cares about his personal vision for America and not the voters in general. Are there no scraps for the other 165 million of us that didn’t vote for Hillary?

Is there a voter in this country that can’t see the border wall battle is nothing more than a political tug of war that has nothing to do with the budget or America’s security? The Democrats simply want to keep Trump from fulfilling his campaign promises, as most of them have walls around their mansions. If Nancy and Chuck don’t believe walls keep strangers off their property, why do they have them? Why do they lock their doors and gates?

Let’s step back to the Brett Kavanaugh hearing for a second, I want to make a point.

A giant wake-up call for me as a voter was the outrages behavior and blatant stalling of confirmation by the Democrats in attendance and how their only goal besides denying Kavanaugh was denying Trump AND Kavanaugh. The overwhelming ridiculous kid glove handling of Christine Ford by both parties was so over the top, you would think they were attempting to save the last hope for humanity. I had no problem with that one hour they took to hear her side of the claim and I gave her a guarded benefit of the doubt which I later retracted.

Her unsubstantiated claims were treated as fact and I am waiting for the day when someone comes forward and exposes her for the liar she is. If the roles had been reversed and Kavanaugh was accusing any female of the same thing it would have been booted out in a heartbeat. Every reasoning voter knows it would.
However, when the Democrats viciously accused BK for hours even though he denied knowledge and no witness could corroborate her version, I felt like I had been violated as a voter and a citizen as much as the man being questioned. Orrin Hatch (R-Utah) asked for clarification from the onset: "We’re talking today about Judge Kavanaugh’s conduct in high school — and even then, and as a freshman in college, I guess, as well."

The hearing should have stopped right then. After watching this attempted witch trial by the Democrats, I now hate the extreme side of the Party, whereas before, I had no idea just how twisted their vision is for the country. It appears to me that the far-left leaning Democratic Party’s vision for America is twisted and each bill they pass is destructive to the American way of life as we know it. They will not relent until the country has become socialist and anyone who has studied history knows this vision has failed all across the globe.


I believe the Democratic Party will never return far enough toward the middle to change my mind, but I am hopeful. I hold the same attitude toward the extreme right’s efforts to force the country in a direction most of us would not like. As a country I believe we must be progressive as times change, but too much too soon is always a recipe for disaster. The SOTU address by Trump was maybe the best he’s done, yet so many Democrats couldn’t even stand and clap when their Party agreed with what he was saying. They would look to Nancy to see if they were supposed to clap... or grimace. Chuck never gave up anything except his pat smugness.
Nope. American politics are worse than the Jerry Springer show and just as preposterous. We need a bi-partisan government which expends all of its energy on making the United States the greatest country in every way. Anything else is unacceptable.
.
at February 07, 2019 2 comments: