W. L. Jenkins Park on Crosby Cedar Bayou Road in Baytown, Texas has a new pair of beautiful green bridges spanning Cary Bayou.  Earlier this year, the 2 old bridges were removed and the many people who use the trails, and there are many, have used the lone Harris county bridge to cross Cary Bayou. 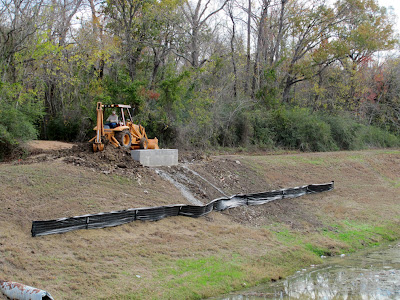 On Wednesday, December 20, 2011, I arrived at the park at 10 am on a tip from the Parks Department, as I was wont to photograph the installation.  The temperature was perfect at 57 degrees F. and I brought my mountain bike so I could rapidly drive around the park to get the best angle.  Park Planner Dustin Schubert was in attendance the whole day and we talked about the progress. 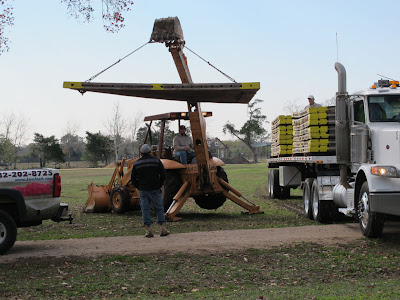 The crane and the support vehicles arrived right on time and the bridges, all 88 feet and 48,000 pounds per bridge arrived about 11:30.  In the meantime, I rode my bike close to 3 miles passing the time as the temperature slowly rose into the 60's and the clouds came and went.

The tractor trailer rigs were so long, they couldn't get inside the park road without the back hoe tractor carrying pad after pad to the front of the park, so they could widen the road temporarily.  This took about 4 hours.  I must say the backhoe driver was a real expert throughout the long ordeal. 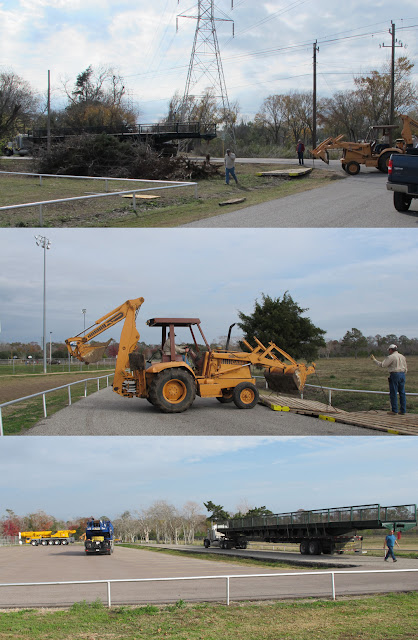 Now that the bridges, loaded on the long 18-wheeler trailers were inside the park, it was finally time to set up the large motor-crane.  I watched and I rode more laps with my son in law Michael Sievers and nephew Lance Marshall.
It rained the day before and the ground was soft enough that later in the day, the first 18-wheeler would have to be pulled, pushed, and cajoled into position by the expert driver of the backhoe tractor.  This looked like an impossible situation as the truck driver had to pull into the field, turn around then back up to the bayou and the truck, trailer, and bridge weighed close to 80,000 pounds, but just as the sun set, they finally had the first bridge in position. 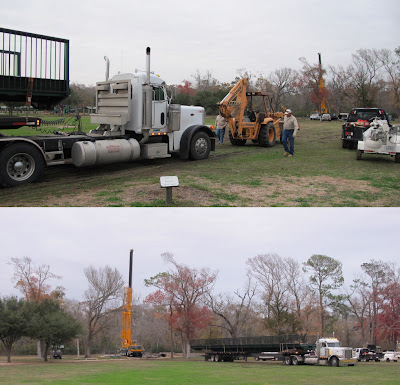 The crane operator knew exactly what he was doing - his mother Maria told me he did, as she was there earlier and we chatted.  When the lift, which appeared to be almost impossible, began, He placed it flawlessly on the cement stanchions in less than 10 minutes. 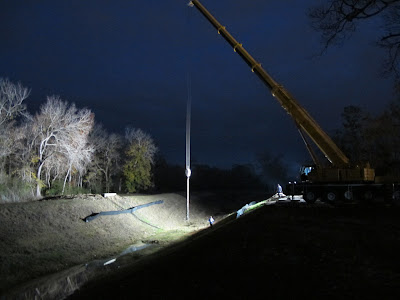 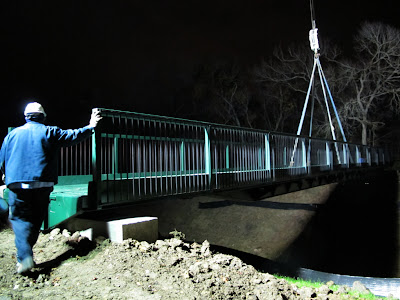 This was at 6:55 pm and as the Parks planner and I shook hands, he told me if it didn't rain, which it most certainly will, they should have the second bridge in by 2:30am.   Update!  They did it!