It can only happen while shopping! 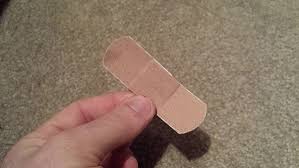 As the big man is my witness, every word of this is unquestionable and void of hyperbolic incredibility. With that taken into consideration, let me tell you what happened yesterday right here in the Tri-cities on what used to be "out in the country" Garth Road.

Let me first lay a little foundation to this tale of extreme brutality and sweaty violence. I know what you are thinking. You are thinking I beat some Chuck Norris 28 year old heavily muscled criminal to the point he needed 4 paramedics... right?  Not to be and thanks for the vote of confidence. I do appreciate it. I really do. 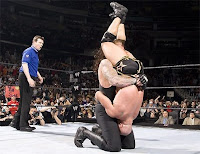 Because I live the life of a behind the scenes self-effacing servant, I feel compelled to tell you I did not do so well. No ma'am. No sir. I have a few more bruises as evidence of my misfortune. The sad part is I now realize the reason I did so poorly against my assailant, is I just didn't see them as a tangible threat until they fully engaged me and in the most embarrassing manner I might add.

Mind you, I'm still in the foundation of this predicament mainly for clarity. Because of my background, I have always felt like I could handle about any hand to hand fighter, at least long enough to deliver the fabled "Dim mak", which is as we know, is the death touch, all seasoned fighters fear, but few can deliver. I cannot divulge whether I can or can't, as I am sworn to secrecy like those Mason fellers. To those guys, their big deal is a secret handshake. To those select few it is the Dim mak, which loosely translated is "Divine bowels". I admit, it doesn't translate well.

Now, the details. It was hot as the red handle on a cast iron skillet on the fire and as made my way toward the entrance to get a shopping cart. Did I say it was hot? Well imagine my shock when I realized I had stepped on a blob of grape bubble gum that would choke a 6 year old. I didn't realize I had stepped in it until as walking, it pulled my new pair of black high-top Chuck Taylor's off. Seeing the gum was on the bottom of both shoes, I went ten feet before falling forward as the stretched gum literally and physically and embarrassingly jerked my shoes off. 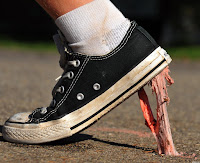 As I hit the parking lot, the only thing that kept me from grunting loudly (and other unmentioned rude noises) was the trash. I might be wrong, but I think it was a large fast food bag or two full of chicken bones and such that actually padded my fall. Being the extreme fitness buff I used to be, I attempted to do a kip after rolling on my back... without success. I slowly mounted my feet and stretched, laughing in case anyone was looking. No one saw or cared as far as I could tell and I brushed off my previous embarrassed state. I quickly tied my shoes back on and began my search for a cart.

But that is not what really set the day wrong.

The more I think about it, the stupider I think I must have been. Let me explain. I'm a big guy and I'm active. Sometimes I'm too active and I start showing out in the gym (since I'm usually the only man in a Zumba class... well you get the idea). The truth is, even at my advanced age, I look a little too sturdy to appear to be a good victim. Little did I know the person who calf-roped me (figuratively speaking - come on!) had me by a good 186 pounds. That is an estimate of weight times mass times impact. On me. Four times. Or more.

Now let me say this. I have Vietnam Veteran license plates on my Jeep and truck. Is it possible to appear more threatening to a motorist who reads that when they are behind me? No. It is not, so how is it I was beaten so soundly with no regard to this warning? Now that I think of it, they appeared after I had fallen down and didn't see my threatening plates.

The sun was so bright, I staggered to my feet and just under the overhang was a lone shopping cart. All the others were being used or out in the parking lot and so hot, you could cook food on them. Looking up I thought at first it was one of those old style dark red soda machines, but no. It was a very large person who was laughing at me, like they knew something I didn't. They want the cart! Both me and my adversary looked at the wheeled blessing and then out to the hot flaming parking lot. Then we looked at each other. I've never, ever...

Laughing at your column right now.

A lot of your self-description reminds me of my own dad.

You may know him or of him - Thomas S.

He goes to 24-Hour Fitness also and is close to your age.

No one in their right mind would mess with him either!

Looking forward to the rest of the story!