My bride and I were asked today if we had tried MIO, the new sweet drink energy enhancer. I did some research on it. I don't think we will add it to our shopping list. 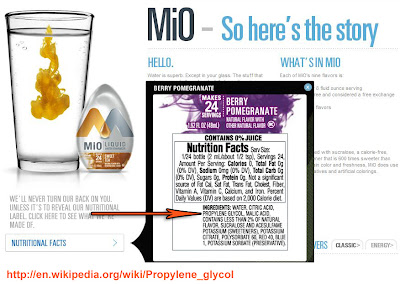 The reason is propylene glycol.  Propylene glycol, also called 1,2-propanediol or propane-1,2-diol, is an organic compound (a diol or double alcohol) with formula C3H8O2 or HO-CH2-CHOH-CH3. It is a colorless, nearly odorless, clear, viscous liquid with a faintly sweet taste, hygroscopic and miscible with water, acetone, and chloroform.

It's nasty to the taste also. Kids suckered me into buying it one time. VM

O jeez, I am sitting here with a half empty bottle now after drinking their black cherry one in it.. then I Google it, and Google bottled water. Seems 40% of all bottled water is straight from a tap and not even extra filters and not regulated as city water is. U cud be drinking one that was bottled next to a landfill or waste dump. Yeah, I think I will just fill up from Baytown water....jeez BP

In this months water bill, you can read the 2011 water report. Baytown has superior clean water. I've always asserted that and its true. Hook up a filter and run Baytown's water through it if it makes you feel better and you will have water as good as anything you can buy.

Like wine.... if you drink several bottles you will yack. But if you stick with a glass or two it is healthy. ;) JB

Propylene glycol....isn't that anti freeze? Can't be good for you.... KC

Wow I had no idea. Thank you so much for writing this. I will pass this onto my family and friends!
From, a college student who used to love MIO....

FDA thinks it's "generally recognized as safe." Not too sure how much good that does you, but in high school my auto tech teacher showed us the two types of coolant: *propylene glycol and ethylene glycol. Sooo.... Probably would not want to drink engine coolant...

Just figured more info might help the discussion. Then again, i did just get all this thru google, so i guess anyone who actually cares enough to properly research it could jfgi.